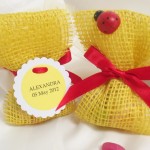 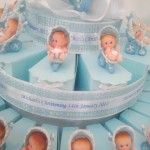 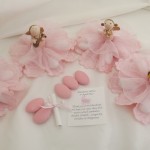 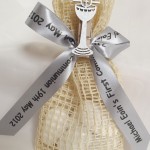 Favours are an important way to say thank you to your family and friends to any occasion, a Christening, a Wedding, a First Holy Communion or indeed a Wedding anniversary. The giving of the small gift requires no words in itself, its a gesture well appreciated by adults and children alike.
But not only that, favours can be personalised to add a special touch to the item itself and to put into written words what they mean.
We at BBBonbon personalise all our favours, free of charge.
Each favour has a note inside or outside, with the type of occasion it is, the date, the name/s and a few words, chosen by you, the client, such as “Thank you for sharing our special day” or “Hope you enjoy my little gift and these five sweets which symbolise, health, wealth, longevity, fertility and happiness” or a simple “Thank you for joining in our celebration.”
There is more, at BBBonbon you can now personalised your ribbons as well.
Pink, blue, silver, gold and many other colour ribbons available which you can choose to decorate any of the boxes available.
The date of the occasion, the name/s and the occasion itself is the most popular options for the personalised ribbon, but there is no limit to what can be written.
The personalised ribbon have been a huge hit!
Please note, the price for the personalised ribbon is separate.

BBBonbon, Ireland’s largest online retailer of personalized children favours
and party bags, is delighted to unveil our new and improved website
www.bbbonbon.ie .
We have made significant improvements to it, so that you will have an easier
and more pleasurable shopping experience with us. Check out our new and
exciting range of favours and goodie bags. We have a design to meet your
every requirement!
As a token of our appreciation for our previous customers, we are pleased to
offer  a 5% discount on all orders received by May 31st 2012. This offer
is restricted to existing customers only.

So please check out our new web site www.bbbonbon.ie and our Facebook page
as soon as possible. Please also tell your friends about us.
We would very much appreciate your feedback  and
would welcome any suggestions you have, on further improvements you’d like
to see. 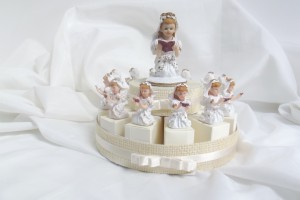 It’s that time of the year again  where First Communions are fast approaching and we at bbbonbon.ie, alongside the traditional Communion favours, are proud to present the Favours Communion cake.

What is a Communion cake, what is it made of, does it substitute the traditional First communion  cake?

These are the answers:

The Communion cake is a cake because it indeed looks like one,  but it is not made of sponge or biscuits or even chocolate, it is made of many boxes, from a minimum of 15 to a maximum of approx 70.

Each box, made of thick card,  is shaped as a slice and it is placed in a circle card tray with a centrepiece creating the illusion of a cake.

The more the slices used, the taller is the cake.

The colour can vary, the slices are traditionally white for a First Communion cake but can be cream, silver, gold or indeed pink or blue.

Silver, gold or any other colour ribbon, and even better a personalised ribbon with the name of the child and the date of the Communion can be added around the round tray.

Each box/slice is filled with sweets, which, in keeping with the old European favour tradition, should be sugared almonds, but nowadays many people choose chocolates shaped as almonds, foiled chocolates, or indeed some of the  children’s  favourite sweets  such as Smarties, Jelly beans and so on.

Often the favours are personalised with the name of the child and the date of the First Communion, we at bbbonbon.ie personalise all our favours, by including a card in each box,  free of charge.

So does the new First Communion favour cake win over the Traditional Communion one?

There is no answer as it depends on the taste of the customer but we find that more often than not the Communion favour cake is used alongside the traditional cake because the latter, is consumed on the day while the little slices on the favour cake are given to the guests as a Thank You token for attending the child’s special day, it is, a keepsake.

The child who’s Communion it is will be left with the large centrepiece as a keepsake for his/her special day.

We can also add words of your choice.
The giving of Communion favours to your friends and relatives, provides them with a little memento to cherish long after your Communion day is over.
If you have any questions please feel free to contact us at info@bbbonbon.ie 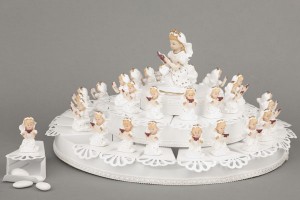